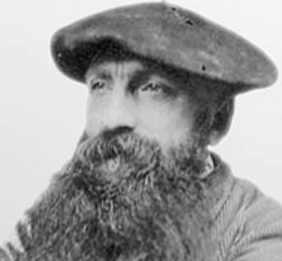 François Auguste René Rodin (12 November 1840 – 17 November 1917) was a French sculptor generally considered the founder of modern sculpture. He was schooled traditionally and took a craftsman-like approach to his work. Rodin possessed a unique ability to model a complex, turbulent, and deeply pocketed surface in clay. He is known for such sculptures as The Thinker, Monument to Balzac, The Kiss, The Burghers of Calais, and The Gates of Hell.

Many of Rodin’s most notable sculptures were criticized as they clashed with predominant figurative sculpture traditions in which works were decorative, formulaic, or highly thematic. Rodin’s most original work departed from traditional themes of mythology and allegory. He modeled the human body with naturalism, and his sculptures celebrate individual character and physicality. Although Rodin was sensitive to the controversy surrounding his work, he refused to change his style, and his continued output brought increasing favor from the government and the artistic community.