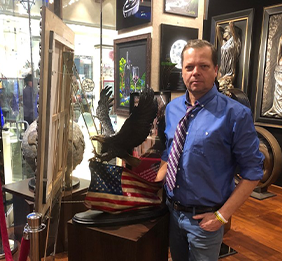 Laran Ghilgieri mastered his craft the old-fashioned way: through apprenticeship. His great-grandfather, Battista Ghiglieri, carved the stately marble lions of the New York Stock Exchange and fostered three more generations of master sculptors in his family: Laran’s grandfather, Angelo, Is best known for his massive marble of a Franciscan priest in Bakersfield, CA, and Laran’s prolific father, Lorenzo, gifted Pope John Paul II, Mikhail Gorbachev and the King of Spain with bronzes of St. Francis of Assisi, in the spirit of peace.

Laran Ghiglieri studied under his father for more than 20 years. Together, they explored the richness of the world, from the Vatican to Indian reservations.

“To travel around and experience this exposure to international museums and the arts was (something) really valuable I couldn’t get from a school,” he says.

His internal drive led him to generate – alone and in collaboration with his father – hundreds of bronzes and paintings by age 20, including eagles spanning 30 feet and elephants reaching heights of 18 feet.

Companies contracted him early on to produce pieces for charity auctions, where he showcased wildlife, Western themes and athletes – particularly golfers and tennis players – in dynamic expressions. The depiction of athletes “in that specific moment when you’re pushing yourself mentally and physically – or just for joy,” he says, individuated him as a leading artist in his own right, within a family of talented sculptors.

On weekends, Laran often experiments with creating fantastical creatures and animation, as well as reproducing Old Masters’ work simply for his own satisfaction. The fantasy pieces allow him to design without the limits of realistic dimensions and appearances, while the reproductions help him discover sources of deep inspiration.

Overall, Western American history acts as his greatest muse. He lives in Oregon, where he still listens to Native American stories. He writes short historical fiction as a hobby, and his research has compelled him to extend his storytelling into sculptures and three-dimensional paintings. Subjects range from American Indians and pioneers to mid-century figures like Howard Hughes.

“These are great stories that can be told not just through museums and art – to see it through three dimensions,” Ghiglieri says. “It’s my version of history – what was happening during the birth of America. What the pioneers went through when they came West is a really compelling story, with gold, timber and shipping barons, and farming, and (forming) small governments to create opportunities for people … it wasn’t that long ago that it all happened; I still get second-generation accounts.”

His new series of cowboys, pioneers and Americana stand out with an eye-popping, creative presence. For example, he employs a combination of bright colors, pen and ink, and multimedia to generate his stagecoach paintings. This innovative approach stems partially from his no-holds-barred fantasy work. From his ingenuity emerges a stylized expression that both honors the fine art tradition his family established, and also represents his distinctive take on history.