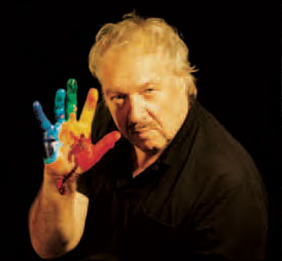 Lorenzo Ghiglieri was born in southern California into a family of artists in a world rich with ethnic, cultural blends. From the very beginning, he was recognized as a child prodigy. Lorenzo absorbed the grandeur of his surroundings – from sunbathed foothills of the Sierra Madres and fruit orchards in blossom to the sandy beaches of the Pacific, bordering a vibrant city lined with palms, alive with glitter and drama. At the age of 17, Lorenzo won a prestigious art scholarship which laid the foundation to his promising career.

He intensely studied the Old Masters, such as Rembrandt, Valasquez and Degas, while frequenting the city’s many fine art museums and libraries. Lorenzo ambitiously developed his own unique, powerful and evocative style. His creativity is powered by his prudent audacity – Lorenzo was a showman, adventurer, naturalist, and explorer incessantly seeking truth and knowledge, all of which formulates his profound character.

In his youth, Lorenzo migrated to Oregon. He built a wildlife sanctuary on his ranch, where amidst the beauty of nature he worked and played with his beloved horses. From there, he ventured into the remote wilderness, exploring the mountains, rivers and deserts stretching from Montana to Mexico, from Canada to California. He researched and recorded subjects for his artwork, sketching imaginative

ideas vital for composing and conveying the action-packed drama of the western frontier. His ability to flawlessly capture the anatomy of wildlife is unmatched, yet it is understanding the nature of his subjects that brings life to Lorenzo’s art. The result is awesome – the diversity and combined forces of genius with experience results in priceless masterpieces of distinguished art in full color and four dimensions.

Lorenzo simply echoed nature and reflected only that which is inspiring, compelling and meaningful. No matter what the chosen theme, a legend is made. He has lived with the natives of the North, documenting the culture of the Upik and Bering Sea Eskimo. He has felt the frigid cold of a harsh and hostile environment, yet within that vanishing life he amassed a collection of beautiful, authentic artic paintings. He befriended rugged hard-edged people of the mountains and came face to face with danger on more than one occasion from which some men disappear forever. He encountered unpredictable grizzly bears and viewed the migration of thousands of caribou. In desolation, there was the howling sound of a hungry wolf disturbing the tundra’s silence. In the stillness of the forest there were the tracks of a shadowing cougar in deep snow and the screeching cry of freedom from a soaring eagle; these are the vital elements and the essence of nature’s magnitude that became etched and imprinted in Lorenzo’s mind.

Once lost in the Yukon Wilderness, Lorenzo emerged with a humble respect and appreciation of the land. His personal contact with the magnificence of nature has instilled a bridled spirit and sensitive quality into his art. Saddled on his favorite horse he wrangled with the rough and tough cowboys, joining a part of history that symbolizes that era of hardy life. With years of exploring, researching and interpreting the eventful colorful history of the American West, he has become world renown for his paintings and sculptures. He lived in the West, the west lives in him and his work. Lorenzo is the West. Discerning collectors who take pride in their ownership of artwork by Lorenzo, include world leaders and celebrities across the globe. His work is powerful and has purpose. It will endure as a record for the past, a lesson for the present, and a hope for the future. It was his passion.