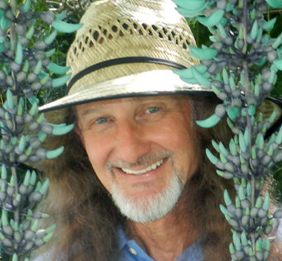 Steven Smeltzer’s artistic odyssey began in a ceramics class in his last year of college. He knew, from then on, that this was to be his life’s work. His intention was to make pottery but every time he would make a bowl or a cup, he would add a face to it. Eventually, he stopped making the bowls and cups and concentrated on making his very distinctive creatures.

An avid surfer, Steven was drawn to the islands and he has lived here for most of his life. He gets his inspiration for his work from the lush, tropical lifestyle and deep respect for the ocean and then adds his own peculiar twist. Steven makes no secret of the fact that his favorite artist was Dr. Seuss.

Steven’s sculptures are made of high-fire stoneware and the eyes are made of porcelain clay. After the piece has dried, it is dipped or sprayed with an oxide strain which is partially wiped off before the firing process. The vibrant colors are achieved by applying acrylic paint, followed by a light misting of acrylic.

Smeltzer has often said that he finds himself entangled in a web of nonsense…and he loves it. Inspired by everything and everyone, his creations come to life in his mind, then take shape from a mound of clay with the innate skill of a true artisan. Each sculpture reflects Steven’s desire to bring a sense of lightheartedness to all that are willing to indulge in imaginative and fanciful art.

Though recently a number of his whimsical characters unexpectedly veered away from the humorous side of life to the more sinister, with a starring role as antagonists in Wray Ardan’s young adult “romance, dark fantasy, thriller” novel, Sweet Desire, Wicked Fate.

While Steven is most recognized for his whimsical ceramic sculptures, he also creates stunning bronze sculptures, as well as oil and acrylic paintings–and has even ventured into the world of CGI (Computer Generated Imagery) animation, working as an Associate Producer and set designer on a CGI television pilot that transformed several of his sculptures into animated creatures.

if his art makes you smile, it is doing its job!

Just a few of Stevens colorful creations (with more pieces to come this year!):

“Oops Fisherman” by Steven L. Smeltzer(move image by clicking and holding OR using the mouse wheel)