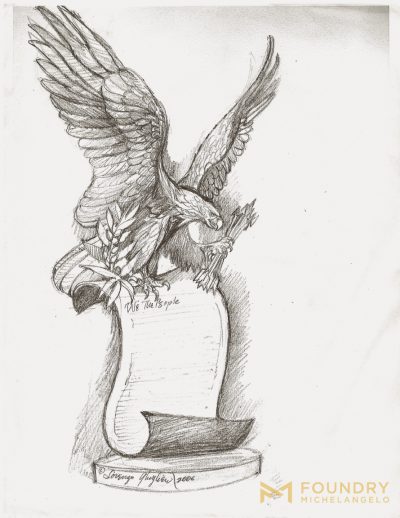 Posted at 09:00h in Press Release by TIC

BATTLE GROUND, Wash., February 8, 2019 – Initially commissioned in 2006, the bronze sculpture The American Patriot depicts a 46” tall American bald eagle landing on article one of the U.S. Constitution with the olive branch containing 13 olives and 13 leaves on one side and 13 arrows clutched in its talons on the other. World-renowned artist Lorenzo E. Ghiglieri created the sculpture after being commissioned by Mark Russo, Founder and Chairman of Foundry Michelangelo. “When I originally had the idea for the piece, I was looking at the back of a one dollar bill and noticed the image, which is also the Great Seal of the United States of America. The image is the American eagle with the olive branch on one side and 13 arrows on the other. A great symbol, I thought; my first question was, how do you sculpt that? As the piece is free floating and not attached to anything. Then, it came to me. Let’s set the piece on top of the U.S. Constitution. When I approached Lorenzo, he loved the design and concept, and we began work on the piece. His only stipulation was that I was the one who had to create the base and constitution the eagle was landing on,” says Mark Russo. “I will make the best eagle I have ever made, but I’m not going to carve out the base and a thousand words, that’s going to be an impossible task,” says Lorenzo.

The constitution did prove to be the biggest challenge with the piece. “This put me to the task as I am a great designer but not a sculptor. How do you place a 100-pound bronze eagle on top of a government document that is pleasing to the eye and that can be cast in the lost wax casting process to the level of a premier world-class sculpture? This was the problem I had to solve, as Lorenzo was currently sculpting an amazing eagle and the best he has ever done. I used polystyrene foam as my base and cut it with a band saw measuring 18” wide by 28” long and 1/4” in depth. This pliable sheet of foam was my base. I inserted sculpting armature into all the edges so that it would hold its shape into the final design. The next step was the text. I hired an engraving company to digitally etch the font and script from Article One of the U.S. Constitution into a copper plate. After five different attempts, perfection was discovered as we lasered the text onto a 1/16-inch magnesium plate. This allowed me to bend the text and plate into the clay and foam base that I created making the perfect base for the piece. Most importantly the plate was readable, and we were able to pull a great master mold impression from the original creation,” says Mark Russo.

The American Patriot was originally created as a limited edition in bronze with an edition size of 777.  After successfully selling 167 of the pieces, the original rubber/plaster mold began to deteriorate to a point where no more castings could be produced, so the sculpture was no longer marketed. At the request of numerous high-end art galleries and new customers wanting the piece, Mark Russo and Foundry Michelangelo decided to restore and redesign the sculpture. “That was one of our hottest selling pieces. It generated millions of dollars in revenue, and now it’s time to bring it back, but we need to make it even better,” says Russo. The process was relatively simple in that the company used the original mold and poured a soft wax of the piece. Although the mold was in bad shape most of the eagle poured very well, and the part that was in the worst condition was the text from the constitution. The good news was that Mark kept the magnesium plate used for the original production. A new more detailed eagle was re-sculpted, the piece was raised a few inches, and a new base was made to include a medallion with the Great Seal of the United States. The edition size was also reduced to only 350 in bronze, 10 in pure silver, and 1 in solid gold. Now complete, the piece is truly amazing. Over 20 of the new Eagles have already been cast in bronze with many more on order. Our second pure silver American Patriot was also cast with over 1000 troy ounces of .999 pure silver, and another three silver pieces have already been ordered. This new image is now on display in many high-end art galleries to include locations in Las Vegas, Lake Tahoe, and Aspen, Vail, Beaver Creek, Colorado, and many others. On Jan. 9 of 2019, Foundry Michelangelo unveiled the 1000 troy ounce silver eagle at the National Annual Safari Club Convention in Reno, Nevada.

Foundry Michelangelo has a diverse business platform, creating and providing fine art in original sculptures from small desktop images and collectibles to larger than life heroic monuments. The company’s master mold collection contains over 1000 original molds from world-famous artists in the United States and around the globe. For more information, visit foundrymichelangelo.com. 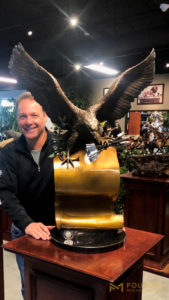 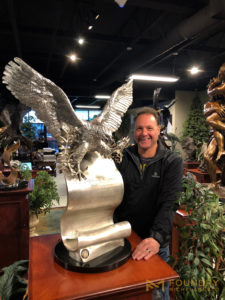 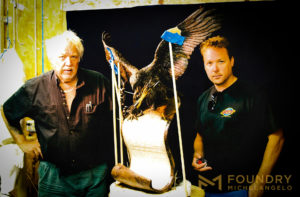