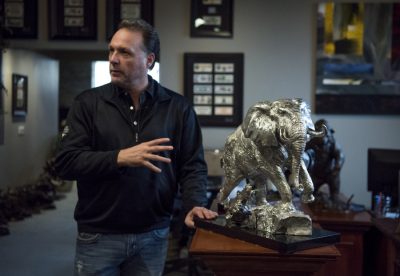 Posted at 17:36h in Press Release by TIC

In the not too distant future, Battle Ground could become home to one of the largest artistic metal foundries in the country, serving as a training

ground for a new generation of artists that create sculpted works in bronze, silver and other precious metals.

That’s the vision outlined by the leaders of Treasure Investments Corp., a fine-art production company that set up shop two years ago in a business park at the east end of Battle Ground.

At the moment, the Treasure Investments headquarters is just a sculpture gallery and some offices. The artwork is all created at off-site metal foundries — most commonly Foundry Michelangelo, a facility the company operates on a ranch near Boring, Ore.

But the company’s near-future plan is to bring Foundry Michelangelo to Battle Ground, relocating both it and the gallery to a new 20-acre campus that will also serve as a school for future artists.

“It’s a $20 (million) to $25 million investment in Battle Ground just for our foundry,” says Treasure Investments founder and chairman Mark Russo. “We’re prepared to do that.”

Russo’s partner on the Foundry Michelangelo endeavor is Treasure Investments CEO Casey Powell, best known as the founder of Sequent Computer Systems. Powell founded the formerly Beaverton, Ore.-based computer processor company in 1983 and served as its CEO until 1999, when it was acquired by IBM for $1 billion. Now he says he wants to put his business expertise to use to build Foundry Michelangelo.

“I’ve done it once already,” Powell says. “(Building a major company) was hard the first time. The second time is easier.” 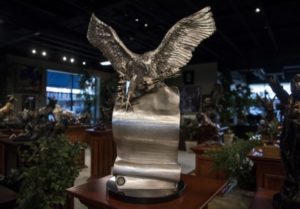 Foundry Michelangelo specializes in cast bronze and silver artwork created using a process called “lost wax” — one of the oldest forms of metal casting, with archeological examples dating to 6,000 years ago.

An artist creates the original sculpture out of wax, which is dipped in a ceramic slurry then blasted with sand. The process is repeated several times to build up a hardened shell around the artwork.

The ceramic is heated until the wax inside melts and flows out, leaving a hollow cavity with the “negative image” of the sculpture, which is filled with molten metal. Cool it down, break off the ceramic shell and you’re left with a bronze replica of the wax original — right down to the finest surface texture details.

“With lost wax I can actually capture your fingerprint,” says Roy Swan, president and operator of the current iteration of Foundry Michelangelo in Boring, Ore.

That’s the simplified explanation, but there are a few other steps. For starters, most foundries aren’t going to want to cast just one metal version of a sculpture, so the modern process starts by creating silicone rubber negative images that can be used to cast multiple wax versions that can in turn be put through the lost wax process. 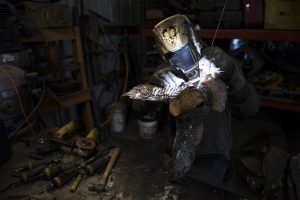 The rubber “master molds” can also be saved for use in future production runs, and one aspect of the Treasure Investments business involves building up a large collection of molds from famous artists.

The other complicating factor is that the majority of the sculptures are too big and too complex to be cast as a single piece, so the artwork has to be cast in a varying number of individual molds, which often require the use of added holes and tubing to make sure the bronze flows correctly.

Swan describes the casting as a collaborative artistic process between the original sculptor and the foundry team members who decide how to break up the piece. A sculpture of a team of horses pulling a stagecoach, for example, will take hundreds of pieces, and the foundry team will often work with the artist during sculpting to make sure the piece can be effectively cast. 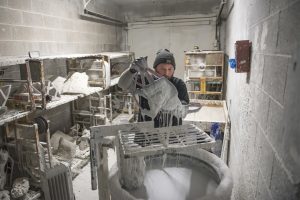 “You don’t want to lose the action in the world (of the sculpture),” Swan says. “So you’ve got to do the hard stuff like the reins and chains.”

The foundry team’s artistic skills also come into play at the end of the process, when the bronze pieces are welded back together and the complete sculpture is touched up and colored.

Rather than painting the surface, most of the statues are colored using patina, which is the natural discoloration that appears on bronze as a result of oxidation. By applying specific chemicals to different parts of the exterior, the foundry artists can create a whole range of patina colors.

“You can do full colors now with patina,” Swan says. “A lot of people think it’s paint, but it’s all patina.”

A small sculpture could be cast in as little as three days, Swan says, though as a business operation in practice it takes much longer — weeks, months or even the better part of a year, depending on the size of the piece.

“If you bought a monument from me today, I’d get it to you in about three months,” Russo says. “The bigger they are, the longer

Unsurprisingly, cast metal sculptures are expensive. The average cost of a piece from Treasure Investments tends to be about $30,000, Russo says, but that price tag can quickly grow into the millions depending on the size and complexity of the artwork and the metal used in casting.

The foundry can create sculptures from gold and other precious metals, Russo says, but bronze is the most commonly used material because it’s the most durable. Sometimes the more expensive artwork is commissioned as a more practical way for customers to hang onto their precious metals, he adds.

“A lot of people who buy bullion as an investment will buy it as a piece of art,” he says.

Russo built his career in curating and selling fine art and sculpted works, and Treasure Investments does plenty of commissioned pieces for individuals and businesses, but Russo says one of the company’s biggest business drivers is art commissioned for charity auctions.

Russo formed Treasure Investments in 2016, initially using a collection of mold assets that he already owned. The next step was to buy the Boring foundry in 2018, which was renamed Foundry Michelangelo. The current Battle Ground gallery opened about two years ago.

The company began producing and selling artwork based on the initial mold assets, as well as new pieces commissioned from artists. The company’s most frequent collaborators are Oregon artist Lorenzo Ghiglieri and his son Laran Ghiglieri.

Russo has also worked to expand the Treasure Investments catalog with a series of acquisitions of new master molds from famous artists, and the rights to replicate them.

Part of the vision involves consolidation; buying out multiple local foundries and building up an extensive collection of molds. Following a confidential purchase of a new collection in February, Russo says the company can now cast nearly 2,000 different pieces from more than 230 artists.

Russo says Treasure Investments has grown quickly as the expanding catalog of artists and molds gives the company more clout in the fine art industry, enabling it to build up a network of partner fine-art display galleries throughout the country.

The Battle Ground gallery employs 13 people, plus 14 more at Foundry Michelangelo. And the business is growing — Powell says the company produced 50 percent as many orders in the first quarter of 2019 as it did in all of 2018.

“We’re out of room here. We need more space,” Russo says. “We’re going to take Foundry Michelangelo to the next level.” 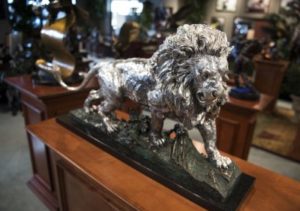 “The next level” is the future Battle Ground campus: a 20-acre headquarters with 100,000 square feet of indoor space to bring all of the company’s operations under one roof — or rather a series of nearby roofs. Russo expects the completed campus to employ more than 100 people.

Russo says he always intended to expand the company’s headquarters and foundry, but the idea for the full campus didn’t take shape until Powell joined the company last year.

“I’ve been thinking about this for many years,” he said. “Casey said ‘you’ve got to think bigger.’ ”

Powell pitched the idea of the Battle Ground campus not only as a corporate headquarters, but as a place to train a new generation of metal workers and a means to revitalize the world of artistic metal casting.

Smaller foundries are struggling to keep their doors open, Powell says, and the industry took a major hit during the 2008 recession. Swan has been in the bronze casting business for 22 years, and he says he’s seen about 20 foundries disappear in that time.

The shrinking of the industry has led to a worker shortage over time, Swan says, because metalworking technical skills are typically built through years of work at a foundry.

Swan began working in foundries at 16 and started to pursue it as a career about three years later, learning from artists at other foundries and eventually opening the Boring foundry, originally under the name Bend Bronze. When the new Foundry Michelangelo opens in Battle Ground, Swan will become its lead operator.

Russo and Powell say they already have a site in mind for the campus, but they can’t reveal it yet. But they have a pretty good idea of how the campus will look, with a five-phase plan for constructing each of the core features.

Phase one is a new headquarters building for the company’s staff. Phase two is a new showroom building, increasing the show floor space to as much as 20,000 square feet.

Phase three is to create the Foundry Michelangelo itself, a larger-scale version of the Boring facility designed from the ground up to be a state-of-the-art operation, with all the necessary tools and space to go from original wax sculptures to finished bronze.

Phase four is the mold rooms to house the company’s ever-growing collection of molds. And finally, stage five will be the “Academy Michelangelo,” with the facilities to allow artists and sculptors to learn the trade.

The campus will include a sculpture garden and is intended to be open and accessible to members of the public who want to get a firsthand look at the foundry operation. The goal is twofold: Inspire and train the next generation of bronze workers, and create a large foundry operation that can sustain itself at a time when the industry is contracting.

“This is a cottage industry,” Powell says. “There are foundries all over the place, but they’re small. We’re going to turn it into something else. You’ve got to have a vision, something you’re shooing for. This is it.”

The $20 million cost of the Battle Ground facility is expected to cover all five phases of the project, Russo says, as well as the necessary site improvements. Treasure Investments has more than 100 shareholders, he says, including a group of investors who are supplying part of the funding — though part of the funding is also coming from the revenue that Foundry Michelangelo is already generating.

“I’ve never seen a resurgence in the art world like I have right now,” Russo says.

Their goal is to be under construction by the end of this year, and to transition the Boring foundry’s operations to the new facility in about 18 months. 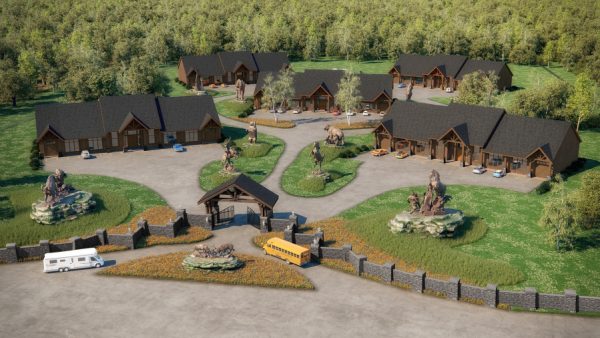 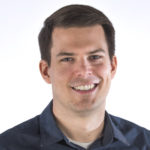