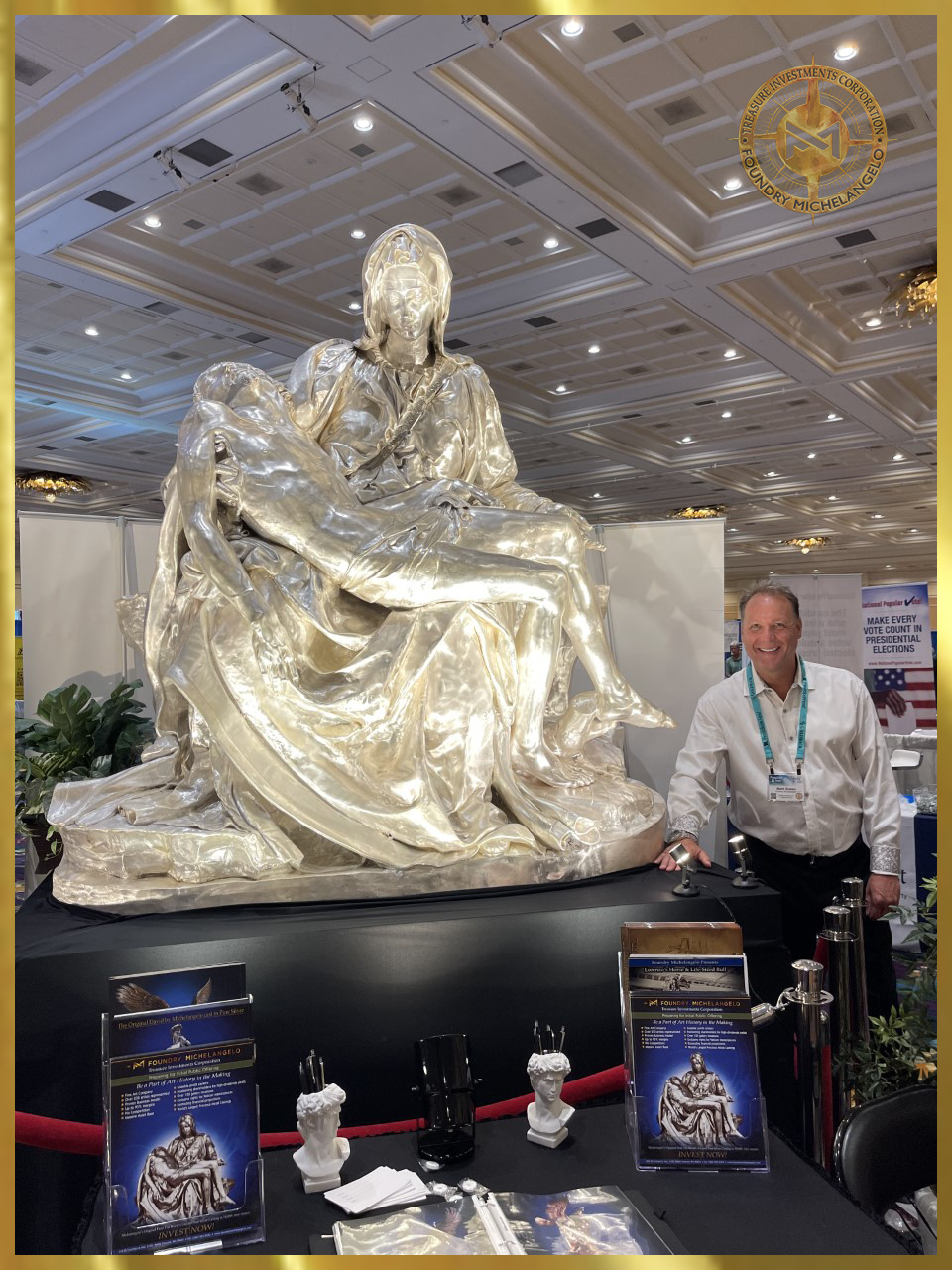 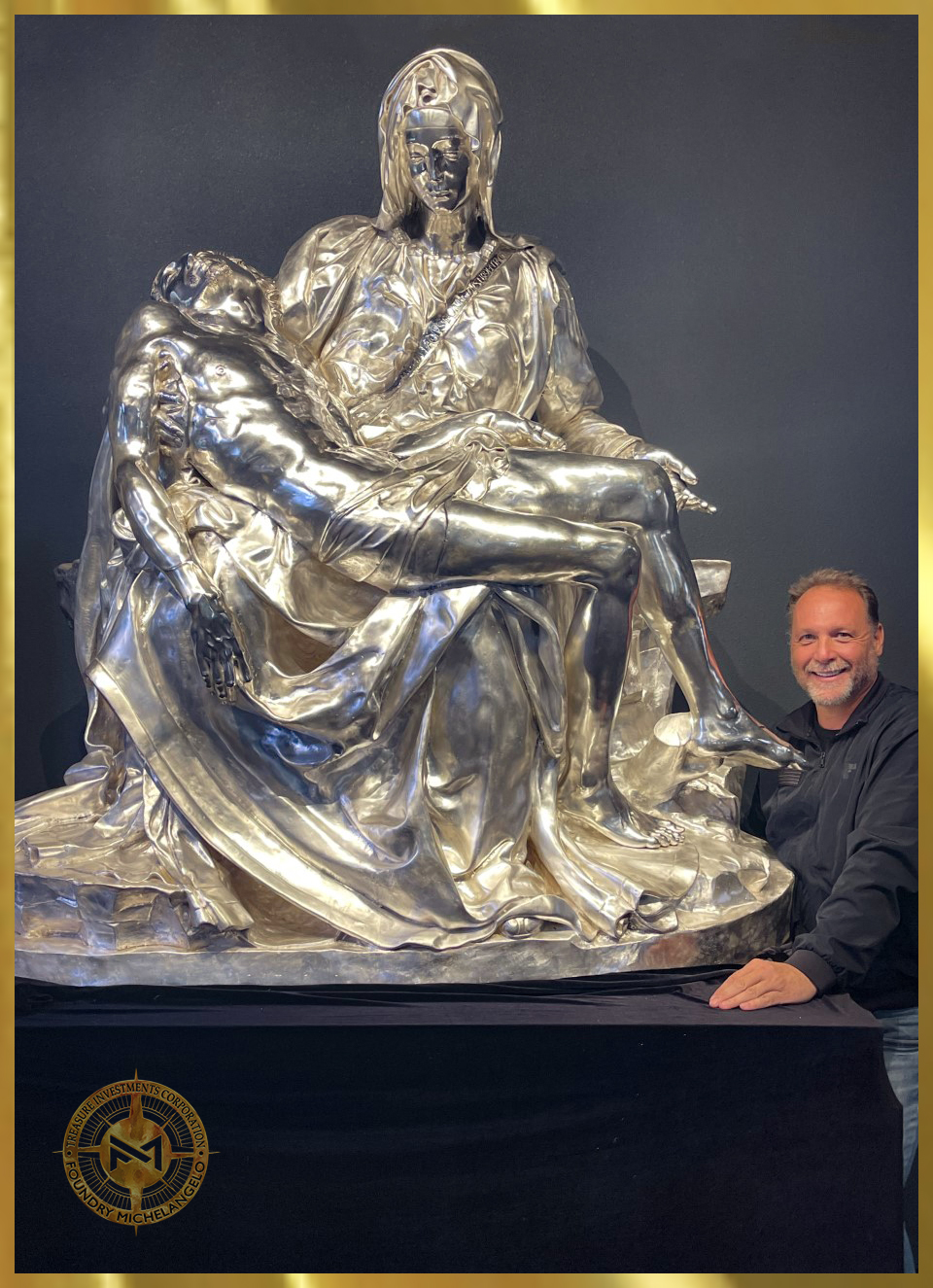 BATTLE GROUND, Wash., Sept. 20, 2022 (GLOBE NEWSWIRE) — Treasure Investments Corporation (TIC) has completed the grand endeavor of producing the single largest .999 pure silver sculpture ever created of the original Pietà by Michelangelo Buonarroti. TIC has been given the exclusive rights to cast number 1 of 1 and only one ever to be created in pure silver. The exclusive rights to the posthumous original masterpiece are authenticated by Casa Buonarroti Museum and Foundation with the red waxes poured from the original mold at the historic Fonderia Artistica Ferdinando Marinelli in Florence, Italy. The Marinelli Foundry was given access to the Vatican prior to World War II when Pope Pius XI summoned Marinelli Sr. with concern over looming war and the possibility of theft or damage of the Vatican’s priceless art collections. Marinelli Foundry, specifically Ferdinando Marinelli Sr, was given the honor of creating master molds of plaster, right from the original marble sculptures, one of which is entitled the Pietà created by Michelangelo in 1499.

“We believe the Pietà in pure silver, as a one-of-one original and the largest pure silver sculpture ever created with empirical provenance to support the piece, could exceed 100 million USD,” said Mark Russo, CEO & Founder of Treasure Investments Corp.

It is from this original master mold that Marinelli poured a flawless red wax which was inspected and examined by Casa Buonarroti for TIC and found to be perfectly compliant with Michelangelo’s original. In a letter written to TIC from the Foundation of Casa Buonarroti, Dr. Alessandro Cecchi, the Director of the museum and the highest authority of authentication for the Foundation of Michelangelo, affixed its coat of arms and the Lily of Florence, authorizing Treasure Investments to produce one and only one silver posthumous original casting of the Pietà.

We believe the Pietà in pure silver, as a one-of-one original and the
largest pure silver sculpture ever created with empirical provenance
to support the piece, could exceed $100 million”

These waxes were shipped by air from Florence, Italy, and received at the TIC headquarters and new renaissance art museum, “Museo Michelangelo” in Battle Ground, WA. “It was an incredible day for everyone at the headquarters when the Pietà waxes showed up; it’s not every day you receive original Michelangelo’s from Italy,” said Mark Russo, CEO of TIC.

Treasure Investments Corporation purchased the exclusive rights to cast over 72 European masterpieces in precious metals from the Vatican collections; including works by Michelangelo, Canova, Apollonius of Nestor, Bernini, and others. Obtaining these rights allow TIC to be the only entity authorized to create these pieces in pure Silver, Gold, and Platinum. All of which will be only one-of-one and will be considered posthumous originals.

The Pietà by Michelangelo, now complete and cast in .999 pure silver, weighs an astonishing 20,021 ounces making it the single largest pure silver sculpture ever created. When asked about the Pietà‘s value in pure silver, Mark Russo stated, “We believe that the Pietà by Michelangelo in pure silver, as a one-of-one original and the largest pure silver sculpture ever created with empirical provenance to support the piece, could exceed 100 million USD in value and whomever the person or institution that makes the purchase has an incredible investment opportunity, as we believe that the true value is much higher than that.” 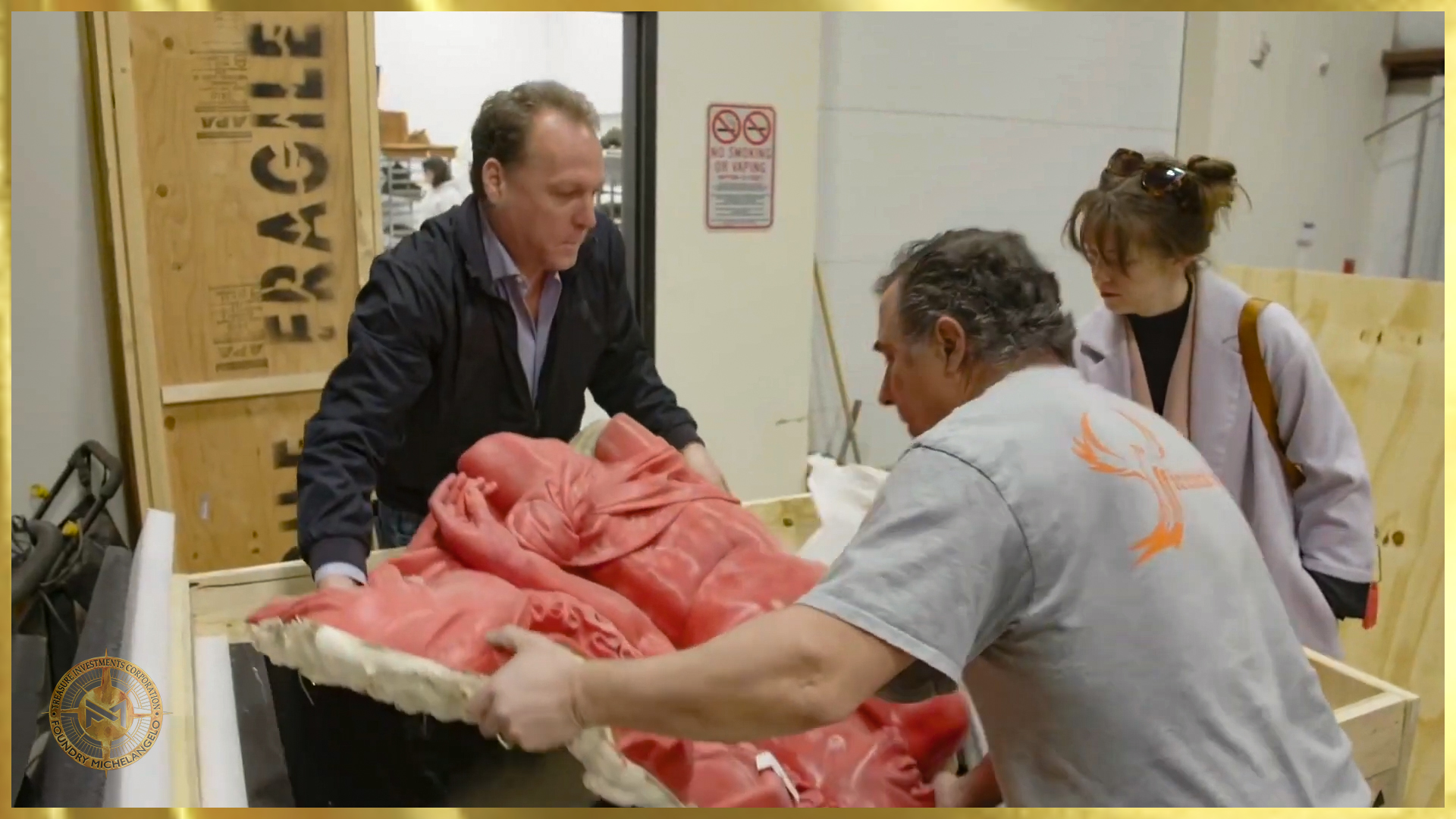 TIC has been casting large sculptures in pure silver for the last 5 years. Most of the pieces weigh over 1000 ounces and are among the collection by famous artist Lorenzo Ghiglieri (1931-2020). The images cast in precious metals are primarily from his eagle collections and other wildlife pieces. In the last 2 years, Treasure has produced over 45,000 ounces of sculpture in silver from our vast master mold collection. “We knew we wanted to cast the largest silver piece ever done but needed to find the right piece. When we asked our team what that image should be, we all asked the right questions. Who is the most famous artist in human history? And what are the most famous sculptures in human history? It was easy to find that Michelangelo was at the top of the list for artists and the Pietà as one of the most famous sculptures in history. The hardest question to answer was would it ever be possible to do, let alone get permission, access to the molds, and obtain the true and empirical provenance to support the validity and authentication of the original work?” said Russo. The Pietà selected is a work of Renaissance sculpture by Michelangelo Buonarroti, housed in St. Peter’s Basilica, Vatican City. It is the first of a number of works of the same theme by the artist. The statue was commissioned for the French Cardinal Jean de Bilhères, who was the French ambassador in Rome. 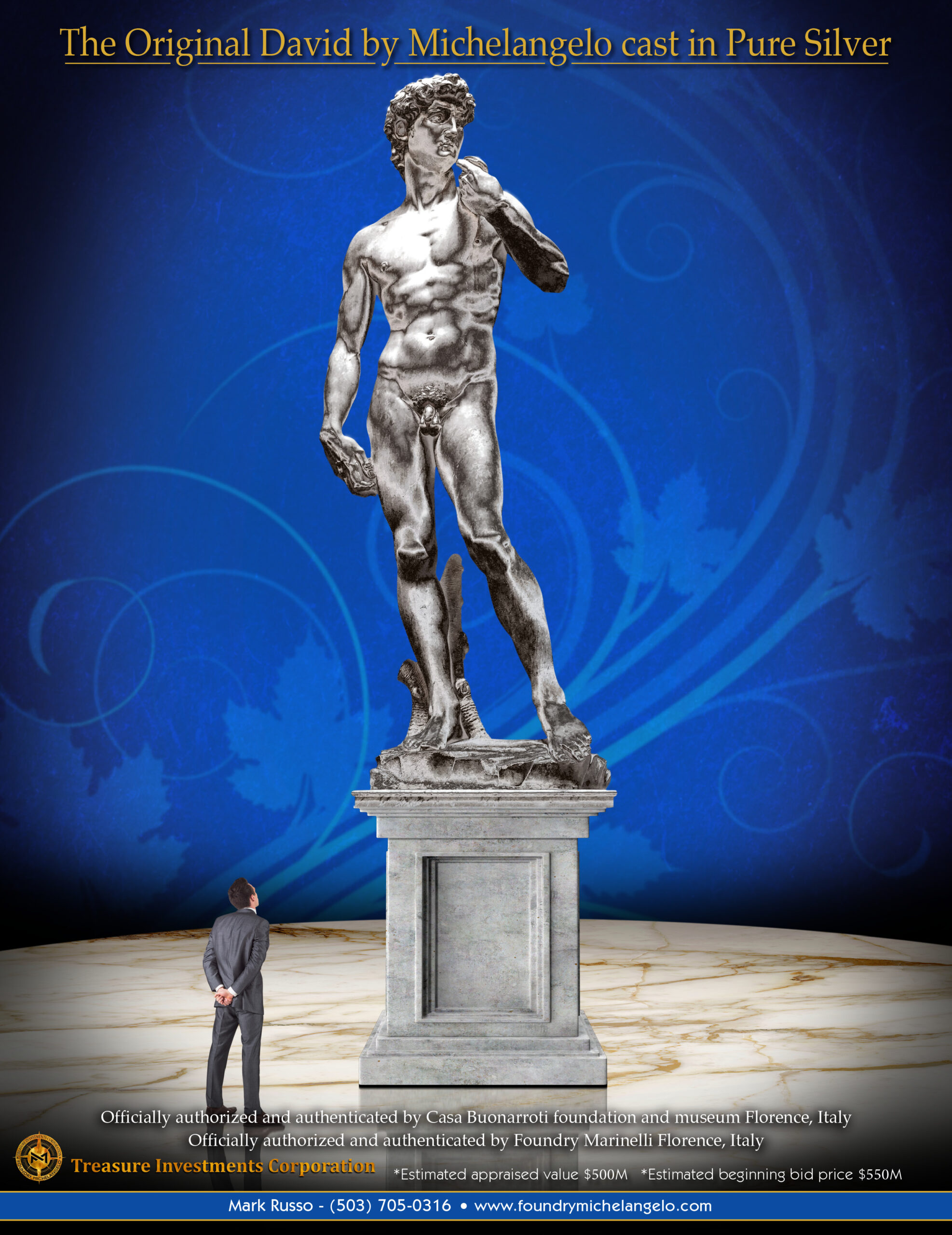 After several years of hard work, an undisclosed amount of cash, and a trip to Florence, Italy, Treasure Investments’ wish came true to begin the production of original masterpieces in pure silver from the Vatican collections. “For us, it was a dream come true. The result of an amazing amount of hard work and dedication to what we love,” says Jason Dilling, President of Sales for Treasure Investments Corp.

Due to the complexity and the nearly impossible challenge to cast and create the largest pure silver sculpture in history from the original waxes, Mark knew who to work with to make this dream a reality. Mark contacted Rip Caswell, the owner of Firebird bronze in Troutdale, OR. “Rip, a world-famous sculpture artist himself has an amazing gift of creation. His wildlife pieces and other spectacular masterworks have been in the fine art and foundry business for decades. Rip’s incredible team at Firebird Bronze has over 400 years of experience in the casting business and is probably the only one qualified to cast Michelangelo’s works in pure silver. I knew Rip Caswell was the perfect person to help bring this project to fruition. His eye for perfection and his talent as an artist made the Michelangelo Pietà casting in silver one of the most impressive sculptures in human history,” said Mark Russo.

When asked what the next piece TIC is going to create in pure silver and how can they ever top the Pietà? Russo’s answer was, “The David, by Michelangelo. Can you imagine that piece in pure silver standing over 19′ in height?”

Treasure Investments has already begun the production of the original David sculpture by Michelangelo. Arguably the most famous art piece in history and TIC will be producing this sculpture in pure .999 fine silver. The red waxes have already been poured and will be sent to TIC headquarters this fall. Treasure Investments expects to unveil the piece to the world sometime next year and when finished, will stand nearly 19′ in height and weigh an estimated 80,000 ounces of pure silver.