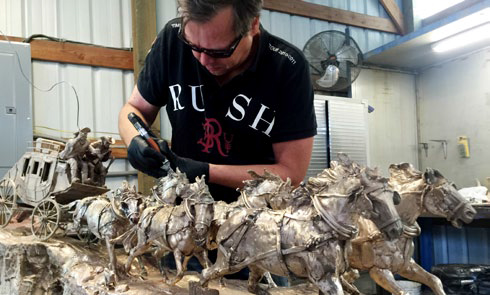 Posted at 23:17h in Press Release by TIC

FreedomFest, an annual festival, is described as the biggest liberty conference of the year

FreedomFest, an annual festival, is described as the biggest liberty  conference of the year,  where free minds meet to celebrate great ideas and great thinkers in  an open-minded environment. It is considered “the trade show for liberty” and features freedom think-tanks, inventors and entrepreneurs, investment and financial institutions, and healthy living experts. FreedomFest attracts people from all walks of life and across the political spectrum and is open to anyone who enjoys a wide interest in books, art, music, film, science, philosophy, economics, health, sports, technology, business, religion, law, politics and more.

As Mark describes, “This year’s FreedomFest theme is The Wild West and we are very excited to have been invited to participate. Our bronze,  pure .999 silver and gold sculpture western works portray not only the theme of the rugged individualists of America’s iconic Wild West, but our patriotic sculptures depict the freedoms we, in the United States of America, cherish and protect.

“We’ve reserved a spacious 10×20-foot booth and will display many of our most iconic sculptures reflecting this theme, including Stage Coach Gold, Spirit of America and Freedom, among many others.”

Stage Coach Gold was commissioned by Mark Russo to world-famous Laran R. Ghiglieri to create a historically accurate 1860s Concord stage coach. Cast using the traditional “Lost Wax Casting” process, in bronze, 210 pounds in weight, over five feet in length and 27 inches tall, it was created from over 3,000 individual pieces joined into one of the most detailed sculptures of its kind in the world today. Mark adds, “We think you’ll agree that this piece brilliantly represents the Wild West in its most recognized and iconic image. Cast in bronze, finished in a dark patina with hand-applied highlights, then hand-rubbed to enhance its incredible detail of not only the stage coach but the lifelike horses, each one unique. The details were sculpted following months of painstaking research from original blueprints of the Concord Stage Company archives.

“Upon close inspection of the stagecoach, you will notice a few arrows have pierced it, triggering the stage driver to urge his six-horse team to pull the enormous coach at full speed. Who shot those well- placed arrows? Laran Ghiglieri  provides the answer in his work Hot  Pursuit,  a breathtaking sculpture of three Native American warriors, commanding their straining ponies to run even faster and seize any treasures, including gold, that the coach might be transporting.

“Among other patriotic-themed works on display is a particular favorite, and one in great

demand, Spirit of America. Breath-taking in detail and finished in hand-applied vivid color, this bronze sculpture depicts the image of the United States, the American Bald Eagle holding in its talons the magnificent American flag.”

Mark added, “In addition to our booth display showcasing a variety of our works in bronze, and pure

.999 silver, we will be available to engage others with opportunities for current and prospective investors in an array of general sessions, workshops and break-out sessions with our team.”

The speakers on hand include notable experts in a variety of topics including Alan Dershowitz, Professor Emeritus Harvard Law School; Rich Lowry, “National Review” editor; Kevin O’Leary from ABC’s “Shark Tank” television series; AND Treasure Investments Corporation, DBA Foundry Michelangelo, Director of Investor Relations Michael Sheppard. Michael is an erudite spokesman and specialist in this field and will explain opportunities that exist in becoming a shareholder. He will also be featured during three very special sessions Thursday and Friday, July 18-19: “Doing Well by Doing Good,” “Open Range: Finding New Places, New Ways for Financial Freedom” and “Having the Opportunity to Invest in an IPO Before Going Public.”