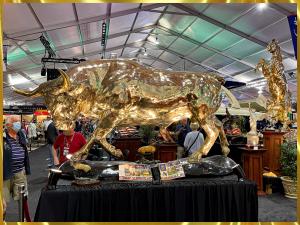 Posted at 03:00h in Press Release by Ricky Reed 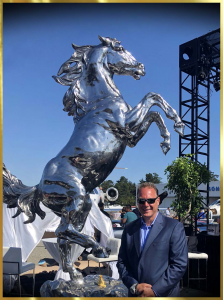 People come here to have fun and invest in cars, art, jewelry, and the
things that they feel passionate about.”
— Mark Russo, Founder Foundry Michelangelo

Foundry Michelangelo will have on display its 10’ polished bronze rearing stallion and 10’ polished bronze bull by world-famous artist Lorenzo Ghiglieri (1931-2020). Other works shown will include pieces by Bill Toma, Laran Ghiglieri, Ross Morgan, and many more of Lorenzo’s works. Foundry Michelangelo had an incredible show with Barrett-Jackson at its first-ever event in Houston, TX in 2021, and achieved a record-setting number of pieces sold at the largest Barrett-Jackson event of the year in Scottsdale this last February. “We love the audience

at these events. The Scottsdale event sold over $200 million in cars in just a few days. People come here to have fun and invest in cars, art, jewelry, and the things that they feel passionate about. We are really excited to be a part of the Palm Beach event,” says Mark Russo, CEO of Treasure Investments Corp.

Featured Monumental Sculpture, Lorenzo’s Bull, cast in bronze and polished to a mirror finish on display at the Barrett-Jackson Scottsdale Event